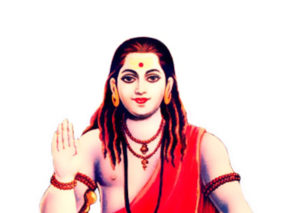 ‘Go’ in Sanskrit means earth and ‘raksha’ means to protect. It is believed that the earth protected the boy so he was called Gorakshnath. There are many stories about his birth and birth place. Some believe he was born in Punajb region, while others claim he was born as Buddhist. Though he is known as the disciple of Matsyendranath, there was around three centuries gap between his and Guru Gorakshnath’s period.

Natha is a religious sect that follows the teaching combination of Shaivism, Buddhism and Hatha Yoga. It is said that Guru Matsyendranath was the one who founded Natha Sampradya (sect) but the natha sect flourished during Gorakshanath saga. City of Gorakhpur is named after Gorakhnath. India and Nepal have many ashrams and temples devoted to teaching of Gorakshnatha. Gorakshnath, was, a well-travelled yogi of his time; so you will observe that each region in India including Nepal has own theory of his birth. He is also known as the founder of “kanphata yogis” who followed Hath Yoga in a spiritual way. You will come across many Kanphata yogis in Himalyan region today too.

Rishi Gorakshnath’s contribution to Hatha Yoga and Natha traditions is just invaluable. The Shiva Samhita sees the potential of asana in each living creature on this earth. It is believed that there are 84 lakhs of species. Lord Shiva has listed 84 essential Asanas in the Samhita. According to Guru Gorakshnath, out of these 84, two meditative Asanas are most important, namely, Siddhasana and Kamalasana. Rishi Goraksha gives detailed information on the Chakras (energy centers) in his writings. He also mentions that there are thousands of Nadis in the human body, which serve as the pathways for Prana (energy). But he says that 72 are most important. The three most important Nadis are Ida (left side nostril powered by moon); Pingala (right side nostril powered by Sun) and Sushumna (central axis governed by fire). He also describes the types of Prana, circulating in various parts of the human force field; prana, vyana, apana, smana and udana.

Do you give yourself these excuses for not practicing yoga?

What is Hatha Yoga?